Not too many people at the session tonight. A little more than a handful. But they still got off.

One time each. A few of my favorites were there — Creez and Worm.

I don’t think it was my first time seeing Unknown, but now I know his name, and I like him too. 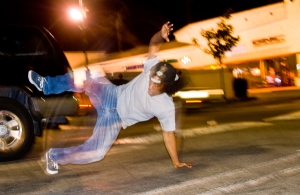 I asked Worm about dancing in the parking lot at night, and if it were “easier” than dancing in a studio. He assured me that he could dance anywhere, but “this is my home,” he said. “It’s easier for me to feed off the street energy. ” He also said he feeds off the energy of the spectators. He told me dancing here is more heartfelt. “Vampires, werewolves, zombies, superheroes, alter egos come out at night.”

When I asked Creez about dancing in the parking lot, he told me, “Krump came from the streets. We are street cats from the hood — South Central, Inglewood, Watts, Compton.” We could be anywhere, he told me. “But we’re out here doing something positive. Krump versus everything,” he declared.

Unknown, aka Chris, emphasized that krump originated in a rough neighborhood, and now here they are performing in a safe environment. He seemed proud of that fact.